An experienced voice in a unique industry

Text Factory’s Aidan Goldstraw spent eight years in the editor’s chair of Promotional Product Distributor (PPD), a magazine aimed at the UK’s business gifts market. In doing so, he acquired a comprehensive knowledge about this unique industry. If you’re in the promo game, why not team up with someone who already speaks your language? Here are just a few ideas to tempt your appetite . . .

Whether print or digital, keep in touch with your client base, tempt them with new products and tell them all about your business. Give us the basic information and watch us make it shine.

A new catalogue is a big undertaking, and it’s easy to get so close to a project that you don’t see the mistakes. Whatever you have in the works, if it’s important, why not let us cast an expert eye over it?

Want to raise your profile in press or broadcast channels? Is that social media campaign eating up time you should be spending on your core business? We can help with all this, and more. 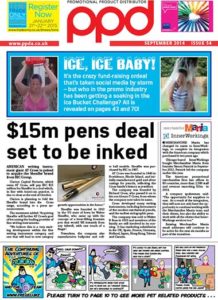 PPD began life as a promotional vehicle for the software and exhibitions of  its owner, Trade Only (now Customer Focus).

In its earliest incarnation, it was little more than a news sheet distributed to the company’s existing clients.

By the time Aidan assumed the role of editor in 2008, PPD had grown into a full-blown magazine but the design was somewhat unfocused and the contents a collection of largely unedited press releases.

Aidan’s brief was to become the ‘public face’ of PPD and transform it into a respected source of ‘hard news’ for the industry. In doing so, PPD tackled key issues such as child labour, factory safety, ‘phoenix’ companies and rogue traders.

Aidan’s experience in mainstream news brought a new, hard-hitting approach which grew both readership and advertising.

Scroll back to top